The first week of March is one of my favorite times of the year; it means the gloomy winter is almost over, flowers are budding, the sun is making more of a regular appearance, and more importantly, the Geneva Motor Show is in full swing.

At the 2013 show, Lamborghini will be bringing a limited edition car, called the Veneno.  The car is limited to only 3 units, which have already been sold, at a whopping price of £3.1 million (or about $4.81 Canadian or $4.67 US – at today’s exchange rate).  That’s a lot of money, but then again, you will never run into another person driving one of these supercars.

The Lamborghini Veneno is based on the architecture of the Aventador LP700-4, and therefore is powered by the same engine with a little tweaking done to it.  The 6.5 liter naturally aspirated V12 engine produces 40 more horsepower in this car, a total of 740 HP; mounted to a 7-speed automatic transmission.  According to Lamborghini, the Veneno can reach a top speed of 354 km/h (220 mph). 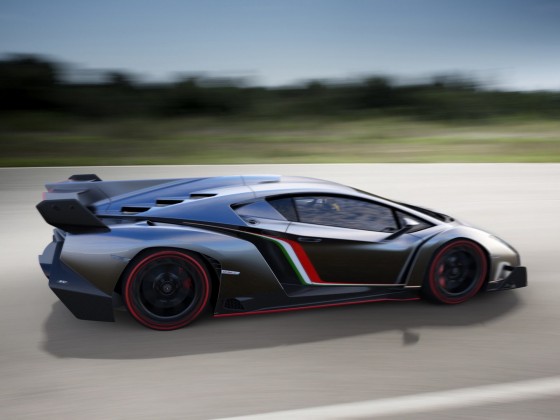 The Veneno celebrates the 50th anniversary of Lamborghini, and it does it in style.  The car’s basic shape looks like the Aventador, but that’s where the similarities end.  The front of the car features very aggressive and futuristic headlights and bumper with lots of carbon fiber winglets and intakes.  The sides feature wide fenders with big air intakes behind each of the doors.  At the rear, there’s a really big spoiler and a LeMans style body panel between the wing and the rear “window”.  The rear also features a massive carbon fiber diffuser and a thin strip of LED for the taillights.  All three cars will come with the colors of Italian flag painted on the doors.