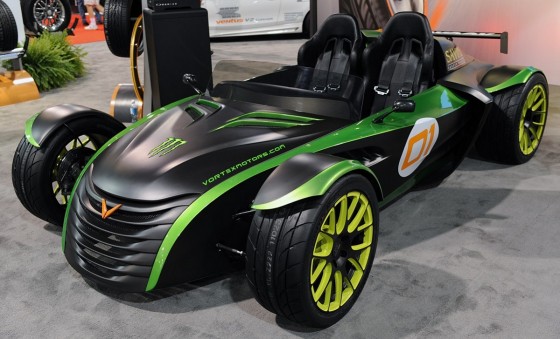 Like the Ariel Atom, the Vortex F1 is a back to basics light-weight high-horsepower sports car with no creature comforts such as windows, doors or a stereo.  Unlike the Atom, the Vortex F1 is a track only car produced by Seattle, Washington based Vortex Motor Company.  The car is designed by former Mazda and Ford designer who worked on the Ford Bronco and Mazda Taiki concept cars.

The body of the Vortex F1 Turn Key race car is constructed out of a mix of aluminum and fiber glass.  There is an option for an all carbon fiber body.  The F1 Turn Key weighs only 1,400 pounds (635 kg) and the target 0 to 60 mph time is set at a lightening quick 2.7 seconds, putting it in super car league.

The Vortex F1 Ultimate not only gets a power increase but also comes standard with a carbon fiber body, carbon fiber seats, a sequential six-speed transmission, improved steering and upgraded tires, wheels and brakes.

Car Video of the Day: Ferrari 599 GTO In A Tunnel

Car Video of the Day: Caparo T1 at Nurburgring