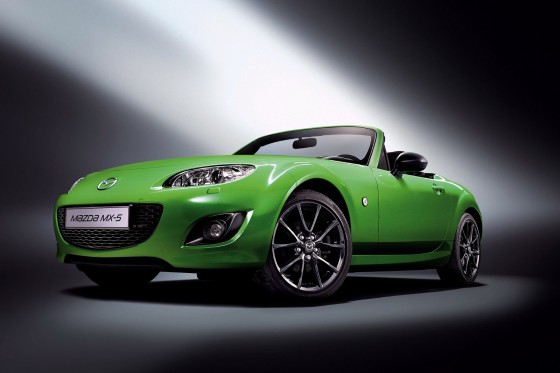 The Mazda MX-5 or better known as the Mazda Miata is probably the best selling car for Mazda since it was introduced in the early 90’s. Since its injunction, the Miata has had 3 face lifts. Although tagged as a “chic’s” car, the MX-5 has a huge following around the world.

This following has led Mazda to introduce a limited number of the new MX-5 Karai. Karai meaning ‘sharp’ in Japanese, is based on the roadster coupe, which has the retractable hardtop. The new MX-5 comes in an eye catching lime green called, “Metal Green Metallic”. A contrasting glossy black for the hardtop, rear view mirrors, trim accents such as the front grille and fog lamp surround, as well as 17 inch alloy wheels in low profile tires.

Power comes from a 2.0 L engine which puts out 160 horsepower. Mazda is also offering an optional sports package which includes a sports exhaust, lowering kit and a not so sport optional package such as an iPod and USB adapter.

The Mazda Miata MX-5 Karai is a limited run of 165 cars and is only available for the German market. The MX-5 is priced at €30,000 (US$43,500), which could buy you a Nissan 370 Z, which would run circles around MX-5. Mazda has really missed the mark on this one as they are trying to keep the MX-5 alive by offering limited edition packages. It would be to their advantage if they totally re-design the MX-5, bump up the horse power and put it in a competitive price range. 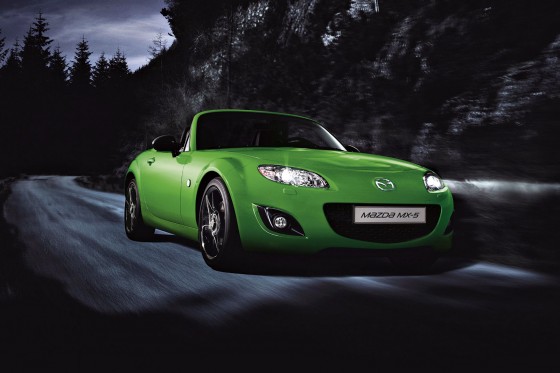