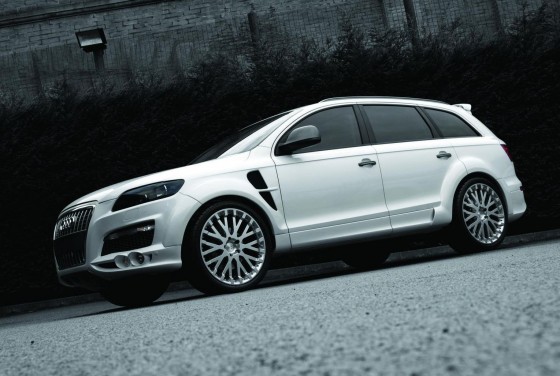 In our opinions if you’re going to “tune” an SUV, it needs to be jacked up with massive tires, big suspension and other off-road goodies.  That is not the case with the Kahn tuned Audi Q7, but we forgive them for their “tuning” because so-called SUV’s like the Q7 never leave the pavement and are generally glorified station wagons with a bit of off-road capabilities thrown in.  Most of these SUV’s will be driven to and from soccer practices and spend a lot of time in shopping mall parking lots.

Anyways, Kahn has been known for tuning Range Rovers, Rolls Royce cars, and Porsche Cayannes with their body kits.  Now Kahn has ventured into Audi-land and has done-up an Audi Q7, which features a wide body kit with wide wheel arches.  The front wheel arches include massive air vents and the front bumper has been redesigned with big air intakes and four fog lights.  They’ve put a roof-mounted spoiler for extra down-force for when you’re traveling at 250 miles per hour (not really, I’m being sarcastic.  The entire car is finished in beautiful pearl-white paint and it rides on 22 inch Kahn RS-X rims.

The interior has been upgraded with two-tone leather with red stitching, the peddles have been upgraded to aluminum pieces, there is a speedometer and tachometer and they’ve included a panoramic sunroof.

The entire Kahn Design package for the Audi Q7 will set you back £12,000, you can do the conversion on your own.