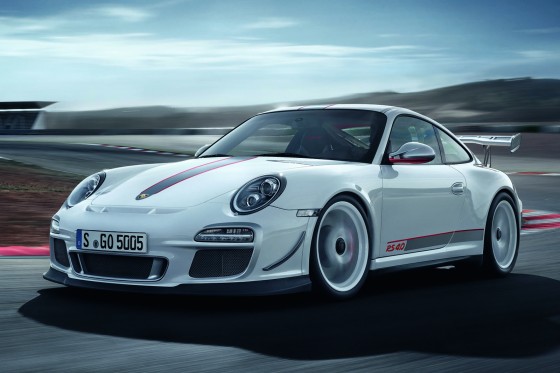 A day or two after the leaked images of the Porsche 911 GT3 RS 4.0 hit the web, Porsche released the official hi-res pictures and specs on the limited edition race ready GT3 RS 4.0.  This is the last iteration of the 911 model that was known as 997, one of my favorite models, it will be replaced with an all-new 991 model which will be showcased at the Frankfurt Motor Show in September. 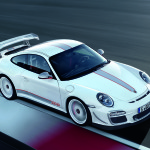 The Porsche 911 GT3 RS 4.0 comes with lightweight body parts; a carbon fiber hood and front wing, plastic rear windows, lightweight carpets and buckets seats, and the deletion of air conditioning and the stereo system.  The end result is a car that only weighs 2,998 pounds (1,360 kg) with a full tank of fuel.  The GT3 RS 4.0 is able to complete a lap of the Nurburgring in 7 minutes and 27 seconds, that’s 6 seconds faster than the GT3 RS and 1.7 seconds faster than Porsche’s supercar, the Carrera GT.

The exterior features a white paint job with silver stripes that are finished with red edges.  There is massive rear wing and new front winglets for added down force at high speeds.  The car comes with light-weight body color matching wheels.